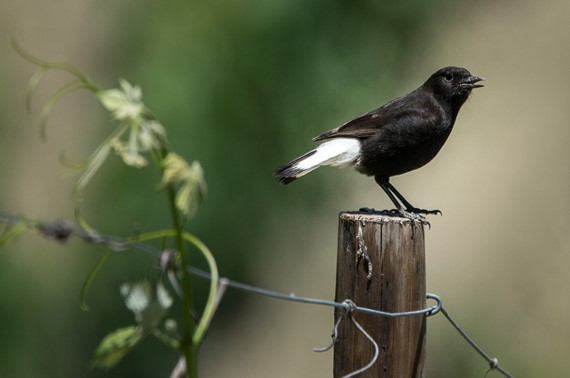 USING METABARCODING TO STUDY THE DIET OF A GENERALIST PASSERINE: THE BLACK WHEATEAR

Metabarcoding studies are now common in ecology and dietary studies are no exception. Metabarcoding has been used to study the diet of an incredible range of animals and even the diet of carnivorous plants, yet incredibly few focuses on passerines. Among other advantages, metabarcoding allows an unprecedent level of taxonomic resolution of ingested items. Nonetheless, this technique has many technical caveats and biases, which are still not thoroughly assessed. The aims of this work were not only to describe in detail the diet of black wheatears (Oenanthe leucura) in Portugal, but also to evaluate the advantages and pitfalls of using metabarcoding in the study of generalist bird diets. In this study we used genetic identification of 115 bird droppings with 4 molecular markers. The method allowed the description of the diet with an unpreceded detail, detecting 552 different taxa. However, there were several problems associated with the technique, namely the bias of some molecular primers towards some taxonomic groups and the detection of secondary predation. In order to avoid some of the common problems of the methodology, we recommend the use of multiple molecular primers when targeting super-diverse taxonomic prey groups and to combine the information of all the primers used in a single dataset. In the case of the black wheatear, we found its diet to be extremely wide, with the presence of reptiles, numerous orders of invertebrates and several plant species. The animal component of the Black wheatear diet was dominated by Hymenoptera, mainly ants, while fruit ingestion was also very common, especially of ruderal plants. Our results also revealed the existence of dietary differences between males and females, with males having a more diverse diet, and females preying more often on ants than males. Metabarcoding proved to be a very powerful tool in providing a better and more detailed understanding of birds? diet. Nevertheless, careful planning according to the goals and subject of the study is needed when designing laboratory procedures and analysis of metabarcoding data.