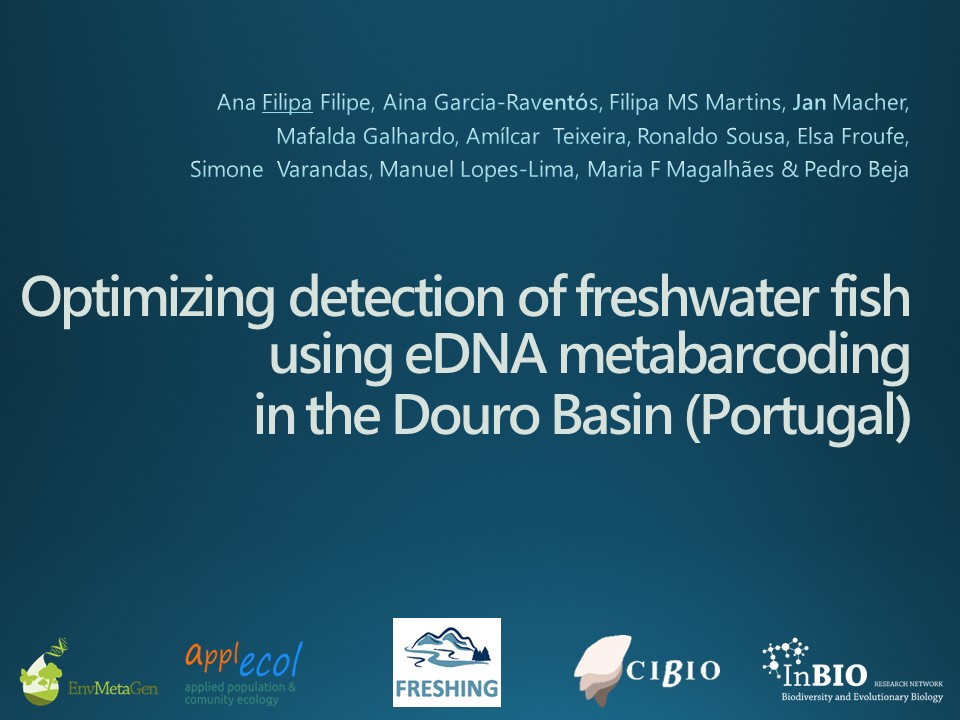 The DNA from water combined with high-throughput sequencing – eDNA metabarcoding – is a potentially useful approach for assessing freshwater biodiversity. While detecting threatened and introduced species is essential to inform managers and respond to Habitat and Water Framework directives, the widespread application of eDNA metabarcoding in freshwater monitoring is still hindered by the lack of standardized field, lab and bioinformatic protocols, and approaches for scaling up its use to regions. In the FRESHING project we aim to build a freshwater fish DNA reference collection developed at InBIO-CIBIO, and examine the relevance of field sampling strategies and lab procedures on the eDNA metabarcoding detection of freshwater fish. We sampled ten sites located at the Douro Basin watercourses during early summer 2017 and 2018, and performed eDNA metabarcoding experiments using multiple samples of water filters (approximately 12 filters per site) and accounting distinct micro-habitats, and using distinct lab protocols for DNA extraction and amplification, totalizing 441 samples. Preliminary results show that with eDNA metabarcoding we were able to detect 18 fish species, being 15 also detected by electrofishing, and that eDNA metabarcoding detectability differs between lab treatments. We further discuss the relevance of distinct field and lab strategies.

FROM DETECTING SINGLE PREY SPECIES TO METABARCODING A 900KM RIVER: A SHOWCASE OF ENVIRONMENTAL DNA RESEARCH BY ENVMETAGEN, PORTUGAL

THE ROLE OF HUMAN IN THE DISTRIBUTION OF PHOXINUS (CYPRINIDAE): TRACKING INTRODUCTION PATHWAYS AND FIRST MOLECULAR EVIDENCES OF THE EUROPEAN MINNOW IN THE DOURO BASIN (IBERIAN PENINSULA)